Nov. 1819, King Kamehameha died five months before the missionaries arrived and they had no knowledge of his death before their departure. In less than 6 months after his death, and as the missionaries were at sea, the Kapu system had been dissolved, and a civil war had taken place. Only the creator of the universe, Jehovah, could have known of these timely events. In the midst of this chaos, the stage is set for the entrance of the missionaries with the Gospel of Jesus Christ in peace, tranquility, truth and Aloha.

“I am the Lord: that is my name: and my glory will I not give to another, neither my praise to graven images. Behold, the former things are come to pass, and new things do I declare: before they spring forth I tell you of them. Sing unto the Lord a new song, and his praise from the end of the earth, ye that go down to the sea, and all that is therein; the isles, and the inhabitants thereof. Let the wilderness and the cities thereof lift up their voice, the villages that Kedar doth inhabit: let the inhabitants of the rock sing, let them shout from the top of the mountains. Let them give glory unto the Lord, and declare his praise in the islands.” Isaiah 42:8‑12


After the death of Kamehameha I, in November of 1819 and before the arrival of Christian missionaries, doubts about the ancient religion led to its abandonment by the regent, Ka’ahumanu, and Liholiho (Kamehameha II). Traditionalists rallied to Kekuakalani, custodian of the war god. Here, in the Battle of Kuamo’o they were defeated by the Monarchy troops led be the premier, Kalanimoku, and the old religion died in a blaze of musket fire. Both sides had firearms, and more than 300 were killed, including Kekuaokalani and his wife Manono. The dead were interred in the rock cairns visible on this lava field in the Lekeleke Burial Grounds at Kuamo’o Bay at Keauhou.  The kapu system was finally destroyed by the Hawaiian Monarchy and the priests & kahunas were overthrown, killed or dispersed, temples were demolished and the kapu’s shattered. This was the end result of the bondage and pain caused by the kapu system and the privileged treatment that was demanded by the kahunas. This action resulted in both peace and a great spiritual vacuum for the Hawaiians as a people. 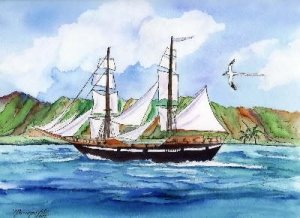 3/30/1820 The ship Thaddeus arrived with Congregational Missionaries to Hawaii. And began to teach the people against the orgies, opium dens, soliciting of native women and other forms of vice. The missionaries were not versed in Hawaiian customs but they did know about the serious problems concerning the STD’s of their days and tried to, unsuccessfully, help the Hawaiian people avoid this great scourge. The Hawaiian people who remained after the great plagues of death through that century owe their lives to the 1820 missionaries. These missionaries came by invitation of Henry Opuakahaia of 1809 and the Hawaiian Alii. The Hawaiian people had heard about the “Torch of Life” of Jesus Christ and were searching for a new spiritual ethos. So as the Christian faith came in 1820  thousands were taught “The Way” and found peace in the Christian faith

It was obvious to the missionaries that God had prepared the way for Hawaii. The great Hawaiian miracle had taken place and all of the obstacles that could have prevented the Gospel from being preached had been removed. Even Hewahewa the highest kahuna (priest) and direct descendant of Paau, the original Kahuna from Tahiti, was the first to set fire to a heiau (temple). He declared: “I knew the wooden images of deities, carved by our own hands, could not supply our wants, but worshiped them because it was a custom of our fathers. My thoughts has always been, there is only one great God, dwelling in the heavens.” Hewahewa also prophesied that a new God was coming and he went to Kawaihae to wait for the new God, at the very spot were the missionaries first landed.  Psalms 2: 6-8    Yet have I set My king upon my holy hill of Zion.  7 I will declare the decree: the Lord hath said unto me, Thou art my Son; this day have I begotten thee.  8 Ask of me, and I shall give thee the heathen for thine inheritance,and the uttermost parts of the earth for thy possession.   “The Life of the Land is Perpetuated in Righteousness.”

The Return of the King COMMANDMENTS
Scroll to top