These thoughts are certainly the heart of the Gospel.  But if it had not been for Floyd walking it out,  I would not have not been interested in 1955, and I would have continued in a total junk pile of sin that I was in at the time.. 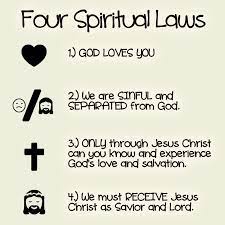 So in our generation, what will best connect and yet give the same truth that is greatly needed.   The 4 Spiritual Laws were used by Bill Bright during the 70’s great revivals in Calif.  I attended his seminars three times on the same subjects just to try to get that truth down deep in my heart where it works..  But really first found them with the Navigators in 1955.

But there must be better ways to convey this truth than as a LAW.    People have been deeply trained to avert and to hate LAWS.     Perhaps something like this might work?   I am sure it could be fine tuned to be even better to be understood by this generation?

1.    Our Eternal Creator is LOVE and has invited us to learn how to be like HIM.
2.    But we were born into Adam’s rebellion and need to choose to change our direction.
3.    Our Creator sent Jesus to tell us the Truth and to help us choose to be really free.
4.    If we will hear Jesus and submit to God’s Truth there will be a happy ending.
5.    And believe it or not,  Our Creator wants to empower us to help us live for HIM.

And of course this is only the beginning of a life time of needed real change.  Some are fast at it, some are slow at it.  I often feel I am a pretty slow learners.   Often I feel that is why I am still here at near 89.  Seems like I never really graduated.   Never really allowed what I have learned to be so deep rooted as to totally change my life style.  But sort of beginning to feel headed in that direction at this time.   About time???    Seems like we are also really headed into Matt. 24, Mark 13 and Luke 21 Jesus Prophesy and into the world’s birth pains for the delivery of the Completed Church, The Body of Christ, The Rod of Iron, that is to rule by HIS side.   So we now have a world full of stuff to draw our attention away from where the world is headed.   But the clock is ticking, seems very fast now, towards the coming birth of the Church and the “Wrath OF God” mentioned in the Holy Scriptures.   BECAUSE…….

#2.  Becoming more difficult to defend your family and home without getting into some kind of stupid litigation.
FaceBook,  RightWingRantsRaves;   If a madman wants to kill innocent people he will find a way.  Killers don’t need guns to kill people.   Timothy McVeigh used fertilizer.    9-11 terrorists used box cutters & jets.  The Nazis used cyanide gas…   Taking guns from innocent people will not protect innocent people.  The problem is not guns.  It is our Godless Society.   When I went to school in the 30’s there was the 10 commandment by the light switch,  prayer, song of all kinds including church,  God in the pledge and Jesus in the Battle Hymn with the Star Spangle Banner flying.  School was God, Country, Mother and Apple Pie all mixed up.  We knew good from bad when we left.

#3.  Obviously life begins at conception but legally it is not made clear and 50,000,000 + children have been killed now (aborted) in our country.  I am sure that God is very upset about this.

#4.  We are allowing children to determine their sexuality by how they feel.  Or on how they have been influenced.  This elevator does not even go to the top floor.  There are no sex change operation,  it is an impossibility.

And we wonder why families are falling apart and they, really are the foundations on which this country was built.   Unless there is a National Repentance and break with this darkness, God’s judgment will not linger for long.
Be Blessed in your day,   Ken<><    ken@trinity-aloha.org     www.trinity-aloha.org

Worthy Brief <worthybrief@worthynetwork.com&gt;
Satellite images taken last year appear to show concealment activity at an Iranian facility previously identified as a site where Tehran was accused of manufacturing a key component for its nuclear program.    The developer of the Keystone XL pipeline announced Wednesday that it had pulled the plug on the project, citing President Biden’s decision to rescind its cross-border permit, bringing the 13-year battle over the major infrastructure project to an end.     A new Gallup poll shows US support for legal same-sex marriage is at a record high of 70%, Gallup reports. The poll also shows that, for the first time, a majority of Republicans (55%) also support legal same-sex marriage.     As the conflict in Myanmar rages on, the Burmese military has now attacked a third church in two weeks in the country’s Kayah state, International Christian Concern reports. This attack follows a recent public call from Myanmar Cardinal Charles Bo for an end to assaults on places of worship.