Today’s Scripture
“Jesus looked at them and said, ‘With man this is impossible, but with God all things are possible.”    (Matthew 19:26, NIV)

You Are A Champion!
Conquerors don’t give up when they lose ground. They march forward with confidence knowing that they will claim victory. It should be the same with us in our daily lives. The Bible says you don’t have to worry—you are an overcomer in Christ! When worry comes against us, we can choose not to dwell on those negative thoughts. Like changing TV channels, you can change the channel in your mind from thoughts of defeat to thoughts of victory. Instead of dreading what could go wrong, meditate on God’s promises. Declare His word, “I am more than a conqueror in Christ Jesus.” The Holy Spirit lives in you and is fighting your spiritual battles for you. As soon as you pray, the tide of the battle begins to turn! That’s why the Scriptures say over and over again that you can overcome anything. You can claim victory through Him today!

A Prayer for Today
“God, thank You for Your Holy Spirit, who is fighting my battles for me. Give me the faith to hold on to Your promises and claim victory in Your Name. Instead of worrying, I will be calm and victorious in You!”

My Comments:
When I was in College most of my grades were just average but there was a few spikes where I was really interested.  One P.E. (Required) option was fencing with a foil and I really got into that class.  At fist it was to practice piercing an assigned hole in a chain link fence to put the button on the end of my foil in the same place after a running jump at it.  Awhile at that and then on to vest and mask and working out with a partner.  Once in a while the teacher would come by and make total fools out of us and show us the right moves.  Sure glade it was just a class.  But she also had one young man in the class that was a Hollywood fencing stand in and extra.  He had very long arms and would make her look really bad when he could.  He never fenced with me as I was a 1st semester student peon.  But I enjoyed the exercise and the teacher allowed me to stay for the next class and the next.  And it got so that I would practice fencing for 4 hours a day.   I really enjoyed the sport.

End of semester, time for the finals and the teacher pared me off with the Hollywood guy and I cleaned his plow and I received an A+ for the  1 credit coarse.   And I dearly look back to the victory and the day that I became my little teachers champion.   What it taught me that Interest and commitment are also basics to Victory.  So If I want to be victorious in my spiritual life I need to spend time leaning to hit the little hole in the fence before going into a real battle.  Life is not about the STUFF,  it is about knowing the WORD of GOD and becoming victorious over sin.  In the greatest temptations of Christ Jesus HE used HIS memorized words from Moses to become a Champion and be Victorious.  Now we also have the words of Christ Jesus and HIS Apostles to learn as to how to become a Champion.  VICTORY always feels so good,  Romans 8,  Hebrews 11 is a good starting place to learn how.   Yours  in His Great love and wonderful grace and mercy,   Ken<>< 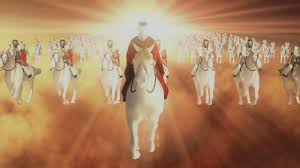